Of the many questions that we are asked, the subject surrounding thickness of slate and whether a thick slate is better than a thin one, crops up most regularly. 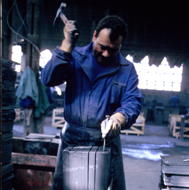 As we discussed earlier, it is the unique layering of sediment that allows this type of rock to be split into layers. Splitting a slate thinly allows the quarry to produce more slates from every tonne of rock – and therefore make higher profits.

However there is a limit to just how thin a slate can be cut before it becomes too weak. To protect you, part of the CE / EN 12323 test ensures that the slate possesses a certain amount of strength. Every quarry is therefore limited to how thinly they cut their slate if it is to be of sufficient strength to pass the EN test.

The EN test also examines if a slate is likely to weather or degrade over time from atmospheric and pollution activity. If the test shows that the slate degrades significantly, then the quarry is forced to split their slate thicker to compensate for the expected degradation of the slate over time.

From this we can conclude that the strength of the slate lies in the quality of the rock it is cut from – not the thickness to which it is produced.

Why does the same quarry offer slates of differing thicknesses?

So why does a quarry produce slates in different thicknesses? For a quarry to be profitable it has to split the slate at the most optimum thickness – as thinly as possible to maximise profit, whilst producing slate with the strength needed to meet its purpose.

Although this varies from quarry to quarry, this optimum thickness tends to average at around 4-6mm. During the splitting process (which is still mostly done by hand), some slate will inadvertently split slightly thicker (e.g. in 6-8mm thicknesses). Because this slate cannot now be split any further (it would then be too thin), rather than waste the thick slate, it is batched together with other slates of a similar thickness and sold on as a separate grade (sometimes at a slightly cheaper price).