As we better understand the impact of changes to the design of the building envelope as a whole, some experts are predicting a return to traditional 1F felt.

When breather membranes replaced 1F as the top-selling roof felt, they were considered the wonder product. The fact is that today, most roofers would not consider anything else. As we begin to understand some of the limitations of breather membranes, many roofers and architects are predicting that roofers will return to traditional under-tile felt.

Benefits of Under Tile 1F Felt 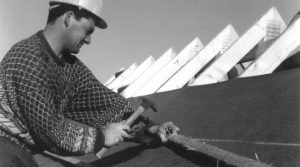 As well as reducing the impact of wind lift, roofing felt is designed as a secondary barrier to rain and snow. Your roof tiles or slates should be doing most of the hard work. The real benefit of roofing felt kicks in when something goes wrong.

If the worse happens, and a slate or tile is damaged, roofing felt will channel the rain harmlessly down to the gutter. Roofing felt also minimises pollutants, dust and insects from entering your attic. Great news for those wanting to safely store their bits and bobs (and that strange wooden mask that Aunt Mildred brought back from her travels), out of sight in the attic!

All this warm, water-laden air had to go somewhere – up. Entering the roofspace, the warm air would hit the cold bitumen felt and then condensate. The result: Damp attics, rotting timbers and calls to insurance companies.

The simple solution was to ventilate. Manufacturers started to produce an enormous variety of tile vents, slate vents, ridge and fascia vents. The downside – they cost money, can be complicated to install, and some look downright ugly.

Breathable Membranes Not Perfect After All?

Breather membranes were originally sold as roofing felt that needed no additional ventilation. The reality, according to the National Home Building Council who insure most new builds, is something else. They state breather membranes should be correctly installed to protect the sheathing and frame from moisture, allow water vapour from within the frame to pass into the cavity.

The truth (as always),  probably lies somewhere in between. Many roofs fitted with a breather membrane, get along just fine without the need for any additional ventilation. However, in some situations, breather membranes become overloaded with moisture. Seemingly random events combine to create this problem. New build properties becoming occupied in cold winters are the primary concern. North facing roofs seeing less sunlight in winter, poor sealing of ceiling lights, complicated roofs located over kitchens or bathrooms are others.

Following even better changes to the design of houses, many manufacturers are now stipulating that their breather membranes should be installed with additional ventilation (the very thing that they hoped to replace). Others require taping at walls or eaves, or the use of plastic vent strips. That’s fine if your builder or roofer understands the detail. But what if they don’t?

Another impact of the use of Breather Roof Membrane occurs when bats decide to use your roof to roost. The simple fact is that bats and breathable roof membranes just don’t mix. The fine fibres of a breathable membrane fluff up like cotton wool, entangling the bats with dire consequences.

So why the return to traditional bitumen based roofing felt? We spoke to some of our local roofers and architects and asked for their opinions.

Has the wheel turned back towards traditional slaters felt? Do you use or have preferences on one type of roofing felt or another. Please share your views on breathable membranes and the return of 1F felt?